The black coffee twig borer (Xylosandrus compactus Eichhoff), an increasingly serious coffee pest, can be contained ecologically where chemicals have failed, a new study just published with the World Agroforestry Centre has found. The study, Influence of shaded systems on Xylosandrus compactus infestation in Robusta coffee along a rainfall gradient in Uganda, found that coffee systems with older and taller shade trees have less infestation than younger systems with smaller trees. They also found that the twig borer infestation is stronger in high rainfall zones as well as with shade composed predominantly of the legume tree species, Albizia chinensis. While the density of Albizia chinensis was found to have significantly influenced the higher proportion of X. compactus-infested coffee plants, a higher density of C. papaya was associated with a lower X. compactus infestation.

The results of the study have serious implications for countries like the East Africa nation of Uganda, the world’s second largest producer of Robusta coffee. The black coffee twig borer, a native of Asia beset with inadequate control mechanisms, had spread to 68% of Robusta coffee (Coffea canephora) farms in Uganda, where it infested 40% of coffee trees per farm and killed 8.6% of coffee-bearing twigs/branches – costing the country US$ 40 million annually for over a decade. 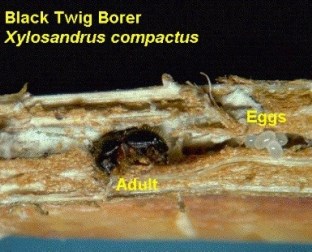 According to the researchers, pruning and burning infested twigs is an option, but requires large investments in labour and time that are unaffordable for most smallholder farmers. Scientists have also found chemical control to be ineffective where the borer remains out of reach deep inside thecoffee twigs. In addition, biological control through mass rearing of natural enemies still requires further knowledge of its biology and ecology.

The study advises that agroforestry designs intended to suppress X. compactus infestation should therefore allow for the presence of big and tall trees and also increase the density of trees that exude sap upon injury of their twigs (that is, mimic matured shade systems and integrate them with any existing cultural control). However, scientists also caution that selection of tree species should consider the suitability of such trees for other ecosystem services.

They also advise that future research should investigate X. compactus flight activity, range and seasonal dynamics, aiming to identify microclimatic variables that influence the dynamics of both X. compactus and its symbionts: the Ambrosia fungi. This knowledge will greatly help in developing guidelines of X. compactus-suppressive CAFS both now and in the future.

This research is a joint study with the International Institute of Tropical Agriculture (IITA), the World Agroforestry Centre (ICRAF), CIRAD and the Uganda National Coffee Research institute (Nacorri). It is part of the CGIAR Research Programmes on Climate Change, Agriculture and Food Security (CCAFS), and Forest Tree and Agriculture (FTA). It was supported by USAID and Hanns R Neumann Stiftung (HRNS).