The 880 mm of rainfall that the landscape around Jhansi (India) receives in an average year easily allows for one cropping season. In the long dry season, however, life becomes difficult in the rural areas and the wells used for irrigating a second crop rapidly dry up, so only a small part of the land can be cropped twice. Many people look for seasonal jobs in cities in this period, as even drinking water becomes hard to obtain, while the livestock roams around freely to feed on whatever biomass it can find. This practice of abandoning cattle is known as annapratha locally.

In the dry years from 2004 to 2007 and in 2014, 2015 and 2016, more than 80% of open wells dried up soon after the monsoon season. Water scarcity due to frequent dry spells in the rainy season resulted in poor productivity, with crop yield ranging between 500–1000 kg/ha for major cereals, pulses and oil seed. Moreover, as water for domestic use is traditionally collected by women and at large distances from home, school attendance is low.

In the cities, there is water from a large reservoir fed by the surrounding landscapes and the rivers that flow in the rainy season. Would it be feasible to retain more of the water in the landscapes themselves, fully recharging the groundwater that can be stored above the impermeable granite substrate? In fact, as elsewhere in India, there have been water harvesting structures (haveli) here in the past that helped achieve this by flooding a part of the land during the rainy season. This temporary pond also captured sedimentation from incoming surface flows, creating a fertile soil ready for a good second crop after the water was drained.

A watershed rehabilitation program facilitated by the Indian Council of Agricultural Research-Central Agroforestry Research Institute, Jhansi in India (ICAR-CAFRI) and the International Crops Research Institute for the Semi-Arid Tropics (ICRISAT) tried to make a difference in the Parasai-Sindh watershed, where nearly 3000 people (with their cows, buffalos, goats and sheep) live in three villages on 1246 ha, in the ways sketched above. From 2012 onwards, the local community, supported by ICAR-CAFRI, ICRISAT, and the Jhansi district administration started implementing watershed interventions in this area. By restoring the haveli to create an additional water reservoir that allowed groundwater recharge, and a series of checkdams to slow down streamflow, the project managed a substantial increase in water availability for a second growing season plus a year-round domestic water supply. 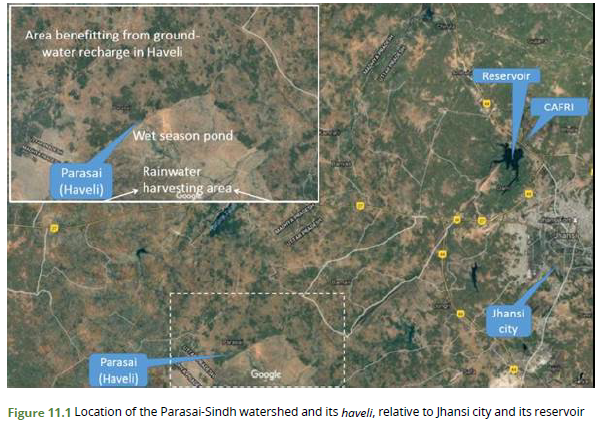 The value of the ecosystem service of groundwater recharge can hardly be overestimated, as the social multipliers (see below) proved to be substantial. Sustainability of the success, however, will depend on the social as much as on the technical aspects. For the land owners in the haveli, some form of compensation is needed that was not foreseen in the initial watershed management plan. Could a form of payments (PES) emerge to have the downstream beneficiaries of the groundwater recharge help offset those who lost a crop upstream? Or is a form of co-investment, led by the public sector an appropriate long-term solution? In this brief summary of the very complex and rich case, we focus on A) the water balance of the area before and after the intervention, B) the subsequent changes in land use (including the shift to agroforestry (fruit and timber trees), C) the social multipliers on the ES value generated, D) those (potentially) losing out in the haveli and the managers of the downstream reservoir, before E) discussing the co investment (or PES) options.